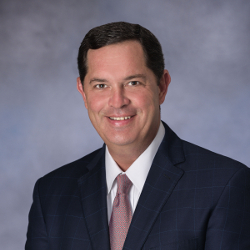 Zachary, LA – December 30, 2019 – The Bank of Zachary is pleased to announce the promotion of Brent Bradley to Chief Administrative Officer.  Brent joined the bank in May of 2018 and most recently served as Senior Vice President of Retail Operations and Business Development.  In his new role, Brent will oversee several major operations departments of the bank including retail, marketing, training and human resources.  He will continue to serve in the business development role for the bank.

“Brent has been a strong member of our executive team and this promotion signifies the importance of his experience, leadership and vision for Bank of Zachary as we continue to grow and expand,” said President/CEO Mark Marionneaux.  “His new role as CAO echoes his growing responsibility at the bank over all aspects of administration.  From business development and retail operations to marketing and training, Brent plays a crucial role on our Bank of Zachary team.”

Brent is a graduate of Louisiana State University, the Louisiana Bankers Association Leadership School, and is currently enrolled in the Barret Graduate School of Banking at Christian Brothers University in Memphis.  He currently volunteers his time by serving on the boards of the Zachary Athletic Foundation, Legendz Sports Academy and the Americana YMCA.  Brent has been involved in numerous organizations in and around the region including the Zachary Chamber of Commerce, the Zachary Economic Development Council and the Livingston Parish Economic Development Council.  He is a 2016 recipient of the Excellence in Sales and Marketing award presented by the Sales and Marketing Executives of Greater Baton Rouge.

He and his wife Mandy live in Zachary with their children, Lauren and John.