A Message from Preston Kennedy: Completing our transition to a new CEO

On May 15, 1978, I reported for a summer job at Feliciana Bank, a community bank in downtown Norwood, Louisiana. My previous summers were spent stacking green lumber at a sawmill and shoveling, uh, by-product, at a stockyard. The bank job had the decided appeal of being clean, cool and considerably more prestigious.

One semester away from earning my LSU diploma, I was headed to law school the following fall. I received my degree in December, but I didn’t go to law school. In fact, I never left community banking. That is a decision that I have never regretted.

On the anniversary of my 40th year as an active community banker (Tuesday, May 15), I will step down as the Chief Executive Officer of the Bank of Zachary, allowing our president Mark Marionneaux to fully assume our leadership. As President Emeritus, I will advise and assist Mark and provide temporary oversight during the leadership transition.

I will continue to serve as President and Chief Executive Officer of our holding company, Zachary Bancshares, Inc., the parent company of the Bank of Zachary, and as Vice Chairman of the Board of Directors of both the Bank and the holding company.

This transition in leadership has been in the making for several years. Mark progressed from Vice President to Chief Lending Officer before being named President at the beginning of 2017. The transition culminates with Mark assuming the joint President/CEO title on May 15. Mark and I have worked together to make this as smooth and seamless as possible.

Successful organizations require effective leadership. Mark has proven himself to be the right leader for the Bank of Zachary, and I am certain that our outstanding staff will extend to Mark the same respect and loyalty that has been unfailingly afforded to me during my tenure at the helm of the Bank.

At the Bank of Zachary, the foundation for greatness - as well as goodness - was laid in ages past, carefully nurtured by generations of our predecessors. I am proud beyond measure to know that the legacy of the Bank of Zachary has been preserved and enhanced. It will continue to be as we go forward under the direction of a new leader. 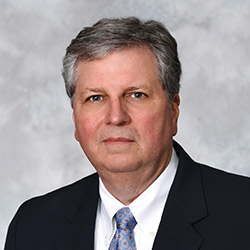